Showing posts from April, 2019
Show all

The Case Against Saccharin: Weight Gain in 12-Wk Human Study Only W/ 1st Gen. Sweetener or Sucrose | Plus: Have You Noticed That Coke 'Secretly' Pulled it Only Recently? 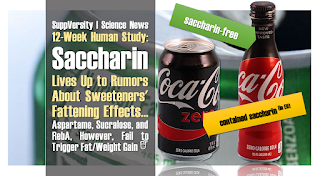 I had to change both, article and thumbnail repeatedly. Initially, I realized that the EU coke ZERO formula contained saccharin, while the US version didn't, then I checked on the official website and found (a) 'Zero' is no longer officially sold in Germany and the follow-up "Zero Sugar" doesn't contain saccharin in the US & EU 😲 If you follow the SuppVersity  and/or myself on Facebook, you will have seen my link to an interview with the author of the "artificial sweeteners" <> "stroke" study that made the headlines lately. In the interview, the lead author puts his results into perspective; a step that's absolutely missing from 99% of the press coverage ... worth reading, but unlike the study Tal Ben Moshe shared on the ISSN Facebook yesterday, not a new intervention study in living human beings - one that taught me several lessons in the history and spectrum of coke's sweetener compositions. You can learn mor
Read full article » 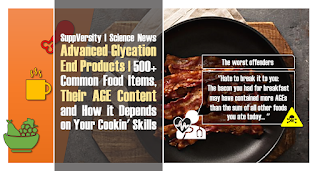 100g fried bacon contains record-breaking 91,677 kU of AGEs. If you microwave it instead, you reduce the AGE concentration (and its taste) by ~90%! Learn more about the complex relationship between food, type, processing, AGEs and your health... "AGEs kill!" That's the message many headlines of mainstream science-news outlets have been sending over the last 2-3 decades - headlines that are usually based on observational studies. Most of them will then discuss epidemiological data, commonly ignoring that the very same food groups that are most likely to contain significant amounts of advanced glycation end products will also contribute to metabolic disturbances, which, in turn, increase the endogenous production of AGEs... So, is the answer your usual "just eat healthily"? Don't worry I am going to go beyond that recommendation in today's SuppVersity  article, but I would say: eating a minimally processed whole foods diet, should be the basis of
Read full article »
More posts
Disclaimer:The information provided on this website is for informational purposes only. It is by no means intended as professional medical advice. Do not use any of the agents or freely available dietary supplements mentioned on this website without further consultation with your medical practitioner.