Showing posts from January, 2019
Show all

TMAO: Eggs, Meats and Your Cardio-Metabolic Health | You Can Sill Eat Eggs & Meat, If You Got 'the Right Gut Bugs' 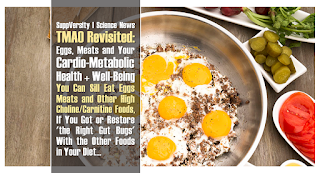 The (ill) health effects of choline and its pre-cursor l-carnitine in animal products like eggs or (red) meats are probably mediated by a diet devoid of prebiotics... however, simply pounding more resistant starches, for example, seems to do more harm than good. If you have been following the SuppVersity  News on Facebook ( a must , btw ;-)), you will be aware of the "TMAO"-issue. If not, here's the gist: The ingestion of certain dietary nutrients - primarily choline, phosphatidylcholine, and its precursor l-carnitine can serve as a precursor for the ultimate generation of an atherogenic metabolite, trimethylamine N-oxide (TMAO). TMAO, in turn, has been linked to all sorts of diseases, most prominently cardiovascular disease and the formation of atherosclerotic plaque. Unlike "fish odor disease", the choline/CVD link is unrelated to  your genes : DNA-Fit: Train Acc. to 'ur Genes Is Laziness Built Into 'ur Genes? Keep Muscle While Dieting
Read full article »

You can expect more research updates like this one in 2019 on the SuppVersity... as well as other changes. And best of all, there's still time to let me know what you'd like to see / be changed over the course of 2019... aside from the overdue switch to a mobile-ready webdesign (#IRemeberThePromises), obviously. While all three studies in this research update have been published last year, they are by no means "yesterday's news" - not even for those of you who "know" the studies which investigated (A) the effects of vitamin D supplementation on the suboptimal testosterone levels of 100 hypogonadal men, (B) the initially very similar but eventually fundamentally different effects of green- and black-tea supplements on the obesogenic effects of high-energy diets, and (C) the beneficial effects of the co-ingestion of plant protein on healthy people's postprandial glucose levels. What's new? Well, study A doesn't really tell you that vitam
Read full article »
More posts
Disclaimer:The information provided on this website is for informational purposes only. It is by no means intended as professional medical advice. Do not use any of the agents or freely available dietary supplements mentioned on this website without further consultation with your medical practitioner.