Adelfo Cerame - Road to The Wheelchair Nationals '12: Proper Nutrient Timing is Probably the #1 Key to Lose Fat and Still Build Muscle While Being in a Caloric Deficit

Written by Adel Moussa | published on January 05, 2012
I don't know about you, but I fell that, sometimes, it is much easier to identify mistakes and pitfalls in other people's dietary and training regimen than it is in your own. It is a very peculiar form of tunnel vision, or I should say, blindness that befalls us, whenever we are working toward a certain goal for weeks and months. When we have laid out our plan of attack and have celebrated our first victories. In these situations, where we tend to believe that everything is working out "as planned", the very plan we thought be "optimal" at time point T1 may now, at T2, when, with the progress we have made, the foundations on which we have based our plan have changed, strategies we previously considered "optimal" could actually hamper our progress. In situations like these, mentors and real friends who do not shy away from arguing with you are of paramount importance, they will help you in re-assessing where you stand, how you got there and, most importantly, how to proceed. Sometimes, however, all it really takes is an innocent question, a question that will make you pause to think, a question like the one of which Adelfo Cerame is now going to tell you...

"How have you grown on a caloric deficit?! Your arms look bigger too!"

This was one of the messages I got on my phone, from one of my old mentors (when I first started getting into bodybuilding). He had seen some of my progress pics on line and obviously must have liked what he saw. When I called him back, I told him that I could not really explain the underlying biophysical mechanism, but knew that it must have been a direct consequence of the combination of intermittent fasting and the new training techniques (EDT, static holds, 5x5…; lifting heavy, low volume…), I have incorporated into my routine over these first 12 weeks of my contest prep.
About a day later, when I discussed the topic with Dr. Andro, who did not seem to be very surprised about the astonishment of my former mentor, we agreed that the caloric content, the overall macronutrient composition of the diet and the food quality, aside, the way I was timing my meals within my feeding window, could be a, if not the decisive factor which allowed me to maintain or even put on a little bit of extra muscle, as Dr. Andro put it "against the misunderstood laws of thermodyndamics" - or, as a normal human being would probably say it: Although I was actually eating less food than I needed.

The real key, this at least what I believe, to "growing on a caloric deficit" is the timing and macronutrient composition of the meal(s) immediately post workout. Ever since I began intermittent fasting, the meals right after my workouts were the biggest, or I should say, most nutrient dense ones: I am getting about 75-80% of my daily caloric intake is during my post-workout meal - and that does not include the 25g of whey protein I down immediately after my workouts.

When lean is not ripped enough, calories begin to count again

A pros pos calories, for someone in my position whose body fat percentage is already below the 10% mark and for whom being ripped, is only the prestage of being totally shredded, calorie counting, or I should say, a high degree of awareness of the amount of nutrients I am eating becomes is a must. Over the last two months I have continously been cutting back on my daily energy intake: 1600 kcal on December, and now 1400 kcal.

Interestingly, the reduction in calories has not hampered my strength, my energy levels or overall well-being, yet. I did not feel sleepy, lethargic, or irritability. My sex drive did not drop and the extreme cravings and the never-ending battle with hunger, I am used to from previous preps, did not occur.. much of this is probably related to the fact that even on 1,400kcal /day I can still eat to satiety within my feeding window. I am nevertheless suspicious, especially because this is the first contest prep, where I am using and intermittent fasting protocol and who knows, maybe the hunger pangs will come...

No hunger, no lethargy, no cravings, but still: Better save than sorry ;-)

The call I received from my former mentor, on the other hand, reminded me that my progress on the "high" 1,600kcal regimen has actually been quite amazing, so that I decided that, even in the absence of hunger pangs, cravings and lethargy, it would probably be wise to smoothly increase my caloric intake again, in order to have more "caloric reserves" (not in terms of body fat, but in terms of being able to cut back on caloric intake without the risk of losing too much muscle mass), when, later in my prep, my progress begins to stall.

As I have mentioned before, the timing of the meals, i.e. the characteristic fasting-feeding interval and the nutrient density and macronutrient composition of the individual points, are the constituent factors of my success. I mean, if you were simply dividing those 1,600kcal by 6 and eating your "healthy and weight loss promoting" (watch out for the irony, here!) 6 bodybuilder-standard-contest-prep-meals a day that would be only 266kcal per meal... what? Yeah! That sucks! And to be honest, I don't even want to do the math for the 1,400kcal I have been eating the past weeks. Now, if you allocate the same meager 1,600kcal to 3 meals, eating 20% (320 kcal) of your daily allowance pre-workout, 60% (960 kcal) post-workout and 20% (320 kcal) with your last meal - all within a 6-8h time frame - that does not only sound much more satiating, it also is ;-)

An exemplary nutrition plan on a 1,600kcal intermittent fast could look like this:
Obviously the numbers aren't 100% accurate, but that this does not matter as long as you are not tricking yourself by adding 50kcal in here, and another 50kcal there, it won't make a difference if your pre-workout meal is 400kcal or 320kcal...the take home message here is that by timing your foods appropriately and exploiting the beauty of intermittent fasting you can still eat to satiety while dieting really hard... and I guess the images I posted last week should proof that not feeling hungry won't hamper your progress, at all. In fact, and this is maybe one of the most important lessons I have learned during the past weeks, the exact opposite is true.

Increasing caloric intake on a diet, but how?

As I mentioned earlier, the success I have had, made me reconsider my earlier plans as far as the overall calorie intake is concerned. Now, while it is one thing not to cut back on calories, it is another to re-introduce them, when the goal is fat loss, not mass gain. In view of the fact that the 1,400kcal would at best make me peak too early, in the worst case leave me flat and catabolic, when I am rolling onto the stage in 11 weeks, it would be whacky not to take the "risk"... especially because the reinstallment of some starchy post-workout carbs to get back into the ~1,600kcal/day zone, coincides with my return to escalating density training. During those high-intensity EDT workouts, I am certainly going to benefit from some readily available glucose to replenish the glyocgen stores of my muscles. I will still make sure to keep my starchy carb and fruit intake <100 and will time them so that they will fall right into the 2h window after my workouts, so that the end result (post workout) is probably going to look somewhat like this...
A usual, I'll stick to this for now and monitor my physique week to week, in order to make adjustments whenever I feel they become necessary.

At first I was a little hesitant to add carbs back in. I did not want that water retention (cf. "Three Basic Tweaks to Get Rid of Excess Water") in my lower abs to reappear, but at the same time, I don’t want to be running too flat for 11 weeks. Plus, adding some starchy carbs back into my diet post-workout meal might even help with putting on some more strength and, concomitantly, lean mass while still cutting down.The whole situation reminds me of something I heard a while back from one of the "diet gurus", who may not get everything right, but whose success with clients is something you can hardly deny: "You want to get as lean as you can with as much carbs as you can get away with" ... well, something along the line ;-) The main massage, was though that you should try and keep your muscle as "full" as possible without compromising your fat loss... and while I was still musing about staying full while losing fat, I realized that within the past weeks, where I still had my post-workout share of carbs, exactly that had worked out pretty well. 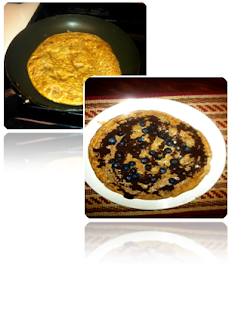 Whenever I'm craving a high glycemic index,, processed, pro-inflammatory pancake, but I canÄt have one, I improvise with these...

Ingredients:
Blend ingredients in blender till’ it starts to fluff and pour in a hot pan with a little bit of coconut oil.

Tip: Just add 2 tbs. of almond butter, ½ cup of blueberries and waldens calorie-free chocolate syrup. And here’s your finished product!
The flipside to this insight is yet that I will have to lie aside my "water retention phobia"... I thusly keep telling myself that when I am taking in my carbs within the 2-hour post-workout window, where, as Dr. Andro pointed out in one of our nightly discussions on facebook, the "exercise-dependent increase in GLUT-4 receptor expression on your muscle will make them suck up the glucose without the need for large amounts of insulin that would be necessary at other time points, i.e. in a non-exercised state, to initially trigger the GLUT-4 expression", the glucose from the potatoes and fruit is not only most likely go into my muscle glycogen stores, but this is also going to happen in the presence of a minimal (compared to other time-points) amounts of insulin. Moreover, he reminded me - as long as my overall physique keeps improving - I will still have more than enough time to get rid of any excess water within the last 4 weeks of my prep...

So, I guess I will just have to deal with the little inevitable bloat that comes with each and every gram of carbohydrate for a few more weeks... and who knows, maybe the water is not even coming back again? If you are interested in that and whether my assumption that I could still make progress on the 1,600kcal regimen will turn out to be correct, you will have to come back next Thursday to read the the latest installment of my weekly contest prep blog right here, at the SuppVersity.
Labels adelfo cerame build muscle caloric deficit calorie counting carbohydrate lose fat macronutrient composition nutrient timing wheelchair bodybuilding
Disclaimer:The information provided on this website is for informational purposes only. It is by no means intended as professional medical advice. Do not use any of the agents or freely available dietary supplements mentioned on this website without further consultation with your medical practitioner.