Written by Adel Moussa | published on December 29, 2014
Do you want to know what happens during days and weeks of gluttony? How the effects "bulking" will have on your body weight and composition, depending on where those extra calories come from? Have you wondered what the optimal nutrient composition on refeed days may look like? And are you concerned about the potential the health consequences of bulking?

Yes? In this case, I would suggest you take a closer look at the following overview of the research. An overview that is probably not complete, but it should suffice to provide preliminary answers to the aforementioned questions.

Only Whey, Not Soy Works for Wheytloss

How many Carbs Before Fat is Unhealthy?

Carbohydrate Shortage in Paleo Land
No! Carbs are not necessarily more fattening in the obese. It's a commonly held prejudice that carbohydrates are more readily converted to fat and stored in the obese, but a study by Minehira et al. that investigated just this found that there was not just no difference in de novo lipogenesis with carbohydrate overfeeding between lean and obese individuals, there was also no increase in de novo lipogenesis, at all, when the when the obese subjects were overfed with a high carbohydrate diet for one day (Minehira. 2004).
If you consume sugar on a refeed, should you prefer glucose, sucrose or fructose? In view of the fact that I don't suggest you refeed more than 1-2 days and considering the fact that you want to get the majority of your carbs from starches on a true bulks, it does not really matter. In fact, studies show no difference in de novo lipogenesis in 96h overfeeding studies between pure glucose and sucrose, which is a 1:1 combination of fructose or fructose in two studies in lean and obese women by (McDevitt. 2000 & 2001). In the long run, consuming amounts of fructose you could only get by drinking a couple of bottles of coke every day, will yet not be favorable for your health - even if taking fish oil can blunt the increase in hepatic de novo lipogenesis, it won't blunt the insulin resistance (Faeh. 2005). 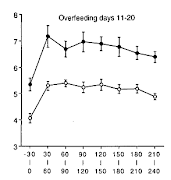 Beware of bulking the way you did in your twenties! It's almost certainly going to make you fat because studies indicate that age correlates with a decreased increase in energy expenditure in response to overfeeding (Roberts. 1996). Since the difference is particularly pronounced on day 1 of the respective overfeeding period (see Figure on the left), I would also refrain from excessive "refeed days" if I were 60+ years old, like the subjects in the study by Roberts et al. from which I grabbed the graph that displays the energy expenditure on a diet that contained 956kcal extra per day (phase II in this study).

Alright, so what's the bottom line, then? I guess, in view of the fact that we still have few studies on high protein overfeeding and no studies on overfeeding on ketogenic diet, a conclusive bottom line cannot be reached, yet. What appears to be true, though is that a diet containing some carbohydrates and large amounts of fat is the worst choice you can make when you are bulking.

A protein and a high(er) carbohydrate, as well as a correspondingly low(er) fat content, on the other hand, appear to be the way to go at least in the short run. In the long(er) run, on the other hand, the differences between higher fat and higher carbohydrate overfeeding appears to disappear - albeit with a small, but potentially practically significant difference in terms of the amount of body fat you will gain (see Figure 4) | Comment on Facebook!
References:

Labels Body Fat build muscle bulk bulking fat fat gain health high carbohydrate high fat high protein hypercaloric leptin lose fat mct overfeeding protein rt3 t3 thyroid
Disclaimer:The information provided on this website is for informational purposes only. It is by no means intended as professional medical advice. Do not use any of the agents or freely available dietary supplements mentioned on this website without further consultation with your medical practitioner.