Showing posts from July, 2018
Show all

Quality of Curcumin Supplements From US Retailers Better Than You May Have Feared | Plus: High Price ≠ High Quality 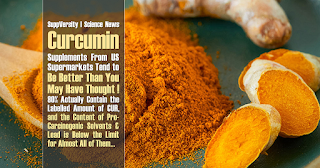 Curcumin has become increasingly popular over the past years. No wonder in view of the ever-extending list of potential health benefits - "potential" is, as T. Tsuda highlights , yet a keyword in this context. No, you don't have to email me asking for the brand names of the 87 products Skiba et al. bought and analyzed (32 of them) for their latest study in Molecular Nutrition and Food Science  ( Skiba 2018 ) ... honestly, bros: I would have told you the names if I knew them. Unfortunately, the scientists from the  University of Arizona, Tucson , follow the example of so many colleagues before them and tell us only the criteria they used to narrow down the 228 surveyed items to a list of 87, of which they later sent 32 to the HLPC analysis. After excluding identical products available at multiple retailers (n = 99) or containing different capsule counts (n = 42), Skiba et al. recorded the exact type, amount, and recommended daily dosage of turmeric; whether or not a
Read full article »

While generalizations are problematic, it is true that the average canned product is better than its reputation would suggest. As a SuppVersity -reader, you will know that frozen vegetables and fruit are much healthier than their reputation would suggest ( learn more ). In previous articles, I have even pointed out that for some foods, such as spinach, the frozen variety is superior to the "fresh" one with respect to almost all relevant nutritional aspects. Now, this raises the question: If frozen fruits and veggies are so much better than most people believe, could the same be true for canned fruits and vegetables? Looking for more ways to improve your diet? Increase your potassium (K) intake! Potassium vs. Diet-Inducded Insulin Resis. In the Lime Light: The Ill Effects of Low K Intakes Bad News: Most Americans are Sign. K Deficient Lean, Healthy ... Correlates of High Hair Potassium Eating a High Protein Diet? Better Watch K! Potassium Bicarbonat
Read full article » 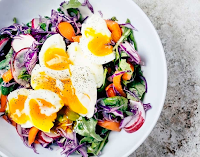 Unfortunately, the authors do not report what exactly (foods) the subjects ate. I am pretty sure you will already have seen the results of Salvador Vargas' recent study in the  Journal of the International Society of Sports Nutrition  elsewhere, there are good reasons for me to still address what the authors claim was the first study to determine "if following a KD hypercaloric diet would promote greater gains in fat free mass and fat loss during a hypertrophic training period in resistance-trained men" ( Vargas 2018 ) in an individual post - not just, but also because the scientists were unable to confirm their hypothesis, that a "KD with caloric surplus in combination with RT in trained men would have a positive impact" on both body fat and lean body mass (LBM). Learn more about and related to low-carbohydrate diets in previous SuppVersity articles: Protein Oxidation an Issue W/ High PRO Diets? CHO ↓ = Perfor-mance ↓ - What about Avg. Joes? M
Read full article »

Even if it is medically indicated, there's more and more evidence that using beta-2-agonists (esp. but not exclusively orally) could provide an unfair advantage to athletes: increased protein synthesis, increased mitochondrial neogenesis, established ergogenic effects,... If you've been following the news, you will be aware that the Tour de France Champion, Chris Froome, has been busted with elevated levels of the beta-2-agonists  Salbutamol  in his blood ( learn more ). Now, we could debate forever about whether the green light Froome just got is a case of double-standards or not, but that's not the purpose of this article, anyway. Rather, I want to explain why the claim that salbutamol, officially an asthma medication, wouldn't be a worthwhile doping agent is bullshit. Learn more about Clen - / Albuterol  and safer ways to get jacked at the SuppVersity Albuterol Can Improve Glucose Metabolism The Myostatin <> Clenbuterol Connection Higenamine Use
Read full article »
More posts
Disclaimer:The information provided on this website is for informational purposes only. It is by no means intended as professional medical advice. Do not use any of the agents or freely available dietary supplements mentioned on this website without further consultation with your medical practitioner.