Caffeine Works - Study Leaves No Doubt About It! Approx. 400mg of Caffeine Get You Going, Even After 32h Without Sleep - So Why Doesn't It Work for You Anymore? 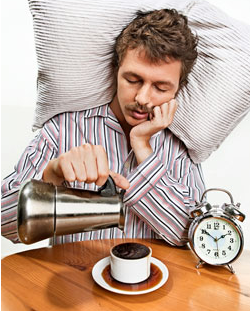 The answer to post-positioned question in the headline of today's SuppVersity article is not easy to find. Therefore I will start with the facts. Facts, researchers from the University of Sfax present in their latest paper in the peer-reviewed scientific journal Psychology & Behavior; facts that leave little doubt that 5 mg/kg of caffeine could counteract the negative effect of 36 h of total-sleep deprivation on physical and cognitive performances, if your body would still react to stimulus - in other words: If your body still reacted like the bodies of the 13 healthy male habitual caffeine-not-abusing physical education students (age: 21.1 ± 1.1 years; body mass: 77.1 ± 7.2 kg; height: 1.77 ± 0.06 m) who volunteered to participate in the present study, it would get you going - seriously!

The students had exactly the same time schedule at the university from sunrise to sunset under the control of the experimental team. Participants had taken part in various recreational low-intensity physical activities such us walking, jogging, or aerobics in our university.

No time to sleep, do your "cardio" HIIT style instead of steady state for hours

Triple Your Energy Exp.
The participants were prescribed with standard isocaloric meals to consume, with breakfast at 07:30 h, lunch at 12:00 h, and dinner at 20:00 h. Only water was allowed ad libitum between meals. They were requested to maintain their habitual physical activity throughout the experimental period and to avoid strenuous activity before each test session. The overall daily energy intake goal was set at 10.5 MJ (2500 kcal) per capita/day.
During the experimental period, medications, which are expected to affect physical performance, were prohibited, more importantly, though:


"Participants were selected according to their usual consumption of caffeine and on the basis of their answers to the Horne and Ösberg Self-Assessment Questionnaire (Horne. 1979) (i.e., to have a group without “extreme type” (i.e., participants were selected as “neither type”)). This second criterion resulted in a sample of participants who shared the same timing in terms of rising times (06:30 ± 00:30 h) and bedtimes (23:00 ± 00:30 h). Participants reported no sleep disorder, are non-smokers, and do not consume caffeine or any alcoholic beverages."

After four consecutive nights of sleep in the laboratory (sleep adaptation: between 22:30 and 07:00 h), in a randomized order, participants performed four test sessions: after placebo or 5 mg/kg of caffeine ingestion during a baseline night (RN) or a night of 36 h of total sleep deprivation (TSD).

Is caffeine tolerance even real? Scientists say: Yes! In 1992 Suzette M. Evans and Roland R. Griffiths conducted a study with 32 "healthy subjects with histories of moderate caffeine consumption" who had to abstain from their favorite beverage throughout the study (Evans. 1992). The subjects were stratified into two groups based on several factors including caffeine preference, which was assessed using a caffeine versus placebo choice procedure. Subsequently, subjects received either caffeine (300 mg t.i.d.) or placebo (placebo t.i.d.) for 18 consecutive days, and thereafter were exposed again to a caffeine versus placebo choice procedure. And the result?

"The study documented tolerance development to the subjective effects of caffeine: after chronic dosing, administration of caffeine produced significant subjective effects in the chronic placebo group but not in the chronic caffeine group." The study also provided indirect evidence for tolerance development: during chronic dosing, the chronic caffeine and placebo groups did not differ meaningfully on ratings of mood and subjective effect. That's important, because it means that not all benefits are lost; plus, it explains why you still don't quit drinking your coffee ;-)
During the run-in, participants were synchronized with a nocturnal sleep from 22:30 to 07:00 h. During the TSD-phase, they were not allowed to sleep and were kept awake by passive means such us watching TV.
During each test session, after 10 min of rest in a sitting position, participants ingested the caffeine or the placebo dose; then they had to remain in a sitting position for 60 min. After the 60 min, they performed
All test sessions took place in similar conditions of temperature and relative humidity (27–28 °C and 63–66%, respectively).  The physical tests were complemented by a simple choice-reaction test and a profile of mood state evaluation - which yielded an impressive reduction of the depression and confusion the subjects felt after the 32h without sleep (see Figure 3)
In conjunction with the increase in vigor, decrease in anxiety and fatigue this alone would warrant the use, but not abuse of caffeine after sleepless nights. The latter, i.e. habituation to high doses of caffeine as they are really common in the pre-workout guzzling world of physical culturists, could potentially nullify the results.

So what? To withdraw, or not? In my humble opinion, caffeine junkies like us just have to live with the fact that the psychological and physiolo- gical effects even high doses of caffeine have are negligible. Caffeine or rather coffee is healthy, but it's only healthy if you consume it regularly; and the lack of effects on the central nervous system in the "habitual consumer" will actually protect your nervous and cardiovascular system. So, just stick to whatever you can still get out of caffeine, but do never increase your intake beyond 800mg per day on a chronic basis - if even that does no longer effect you, you've been overtraining + abusing for years.
Bottom line: We all know that caffeine works. At least for those 95% of us who don't belong to the caffeine hypermetabolizer, there is this memory somewhere deep inside our heads. A memory of our first "high dose caffeine, tear down the gym"-experience. It's a memory that's burried deep below memories of years of daily caffeine abuse and the knowledge that the only way to get anywhere close to the caffeine naive state we were in back in the day is withdrawal...

Yeah, I know that's hard to imagine and actually, there is no evidence that would suggest that withdrawal and resensitization would be necessary to get the dozens of health benefits I have written about in the past. In fact, you could rather argue that 400mg+ doses of caffeine are going to have a negative effect on your health, as long as they still 'cause an increase in Central Nervous System (CNS) activity as it was observed in the study at hand. I mean, what would you expect the health consequences of having one of these "high dose caffeine, tear down the gym"-experiences every (other) day? This can hardly be good for your heart and brain, can it?
References:

Labels brain caffeine CNS coffee fatigue health performance sleep sleep deprivation
Disclaimer:The information provided on this website is for informational purposes only. It is by no means intended as professional medical advice. Do not use any of the agents or freely available dietary supplements mentioned on this website without further consultation with your medical practitioner.