Written by Adel Moussa | published on July 08, 2017
Only recently, you've read the "Caffeine June 2017 Research Update" [(re-)read it] here at the SuppVersity. Some of the effects of green tea have thus already been discussed. After all, caffeine is one of the health-relevant ingredients of tea; it is, however, not the most important one.

As Yuan Fen et al. explain in their latest meta-analysis of the effects of green tea on blood lipids, tea can be classified as green tea, oolong tea or black tea depending on the manufacturing process" (Fen 2017). What exactly it is that mediates the various health benefits of tea (inflammation, hypertension/heart disease, and cancer | Serafini 2011) and their potency may thus differ slightly from tea to tea.

All About Almonds' Health Effects

Egg-Ology, Today: Why Eggs are Awesome 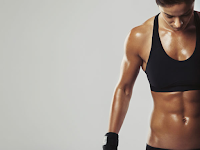 All About Cheese, Your Health, Per-formance & More
For example, "green tea is abundant with kaempferol glycosides, while oolong tea contains more quercetin and myricetin glycosides and black tea is rich in quercetin glycosides" (Fen 2017). Most importantly, however, teas contain substances we call catechins, e.g. epigallocatechin gallate (EGCG), epicatechin gallate (ECG), epigallocatechin (EGC), and epicatechin (EC). EGCG is considered to be is the major and functional component (Fen 2017). Accordingly, hitherto published studies tested or ascribed the health effects of green tea to the high relative amount of EGCG. I have thus chosen both studies using real tea and EGCG/catechin supplements for this SuppVersity Research Update:

Warning! EGCG may mess with the efficacy of your statins (and other medications): It's important to note, that EGCG acutely reduces the pharmacokinetics of statins. This has been proven only recently (Kim 2017) for rosuvastatin in healthy volunteers, whose systemic exposure to the drug was reduced by a whopping 19% when EGCG and rosuvastatin were co-administered only once. Interestingly enough, though, two weeks of chronic EGCG supplementation abolished this inhibitory effect. Green tea does that by interacting with a range of intestinal and hepatic organic anion transport peptides (OATPs) and we're yet far from understanding all its drug interactions. Proven have been the previously mentioned interaction with rosuvastatin, as well as interactions with the blood pressure medication (beta blocker) nadolol, and another statin, namely simvastatin, where it had, paradoxically, opposing effects and increased the plasma concentration by inhibiting both, intestinal CYP3A4 and P-gp and hepatic OATP1B1 (Werba 2015).

And there's more. In rodents on high cholesterol diets, scientists from the Hebrew University in Jerusalem have recently been able to demonstrate that the effect of green tea polyphenols on bile acid will overload your livers ability to get rid of cholesterol and thus promote non-alcoholic fatty liver disease (Tirosh 2017) - a phenomenon that has already been observed in human beings, too. 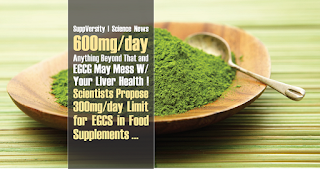 600mg/day Anything Beyond That and EGCG May Mess W/ Your Liver Health! Scientists Propose 300mg/day Limit for EGCS in Food Supplements (read the SuppVersity Facebook News Post from July 2nd, 2017). While evidence that the real deal, i.e. green tea can damage your liver, things look different for supplements with isolated catechins, esp. EGCG.

Dekant et al. recently reviewed the existing literature and came to the conclusion that EGCG has the potential to induce hepatic damage. Based on the finding that "[i]n clinical intervention studies, liver effects were not observed after intakes below 600mg EGCG/person/day," the researchers propose a "tolerable upper intake level of 300mg EGCG/person/day" which would give you "a twofold safety margin" (Dekant 2017).
SuppVersity Suggested Read: "Chronic Inflam-matory Diseases and Green Tea Polyphenols" (free full-text). It is well known that green tea polyphenols (GrTPs) are potent antioxidants with important roles in regulating vital signaling pathways. This review summarizes how they act on transcription nuclear factor-kappa B and related proteins to ameliorate the surge of inflammatory markers like cytokines and production ofcyclooxygenase-2.
Can green tea "fix" Alzheimer's? Latest review of the efficacy of Epigallocatechin-3-gallate (EGCG from green tea) in the treatment of Alzheimer’s disease says that even though "in recent years, natural compounds, due their antioxidants and anti-inflammatory properties have been largely studied and identified as promising agents for the prevention and treatment of neurodegenerative diseases, including AD," the authors highlight that the "promising results" come exclusively from "pre-clinical" studies, so that "drawn clinical trials are extremely needed" (Cascella 2017) before we can tell how useful EGCG is whether it has preventive effects, only or can also be used to ameliorate if not curative Alzheimer's when someone is already experiencing symptoms.
How do I prepare the healthiest green tea? Now that you've learned that a DIY water-extract from green tea is better than commercially available extracts in pills or capsules (at least for FMD), this question is probably preying on your minds.

The answer to this important question comes from a study that will not be officially published before November this year. A study that shows that increasing the extraction temperature will also increase the polyphenol content of your tea. Thi sin turn enhances not just the antioxidant activity of the brew, it will also boost its ability to inhibit α-glucosidase and α-amylase, in vitro. In vivo, however, green tea steeped at 60°C had significantly stronger glucose uptake inhibitory activity (p<0.05) than green tea that was prepared at 100°C.

The answer to the previously raised question "Hot to brew the perfect tea?" is thus both, context- and, as previously discussed research suggested, also type-dependent | Comment.
References:
Labels anthrax EGCG glycogen green tea GTE health heart health muscle glycogen PWO
Disclaimer:The information provided on this website is for informational purposes only. It is by no means intended as professional medical advice. Do not use any of the agents or freely available dietary supplements mentioned on this website without further consultation with your medical practitioner.